We use cookies to ensure you get the best experience on our website.
Home / Tutorials / Vue / Testing

In this Vue tutorial we take a quick high level overview of testing in Vue.

We cover the types of testing we can do, when to test, what to test and what not to test.

Testing is the process of checking that an application functions as expected.

One of the main goals as a developer is to produce a bug free application. An app with a lot of bugs creates a bad user experience, which leads to users abandoning it for good.

We can verify that our application is functioning as expected with two types of testing.

We’ve been manually testing our apps throughout the course so far. That’s to say, each time we wrote a section of code, we manually checked that it (and sometimes other parts of the app) was working in the browser.

In small apps that’s perfectly fine, but in larger apps we may miss many of the bugs a typical user would come across. This is where automated testing comes in, it will take care of testing the application for us.

We can generally categorize the types of tests available to us, into 3 types. 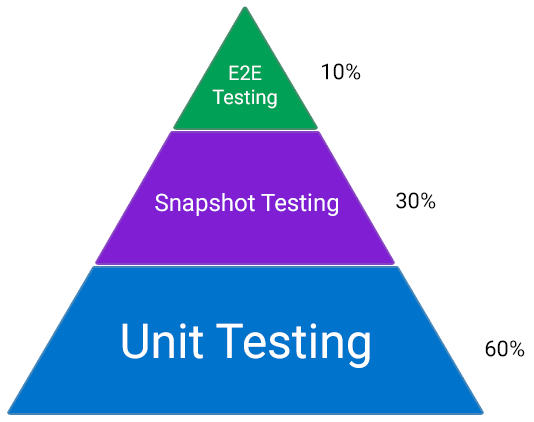 The goal of testing an application is to make development faster. If we’re not careful when writing tests, we may end up spending too much time on tests that aren’t really rencessary.

With experience you will be able to judge when to test and not to test, but let’s take a look at some general rules.

The units that make up our application are the components, so we should generally focus on testing them.

We want to test the output. In other words, did the component display a full name with the greeting message.

The concept of inputs and ouputs are important to understand. In testing we supply an input, receive an output and assert that the output is correct.

The following table shows some input and output examples.

note An input is anything that affects the output, including a dynamic state.

What not to test

As mentioned earlier, we could end up wasting a lot of time testing things we don’t have to.

From the “What to test” section’s example, we know that we want to test the rendered output. But what about the method that actually creates the greeting message?

No, local component methods are implementation details. We’re not interested in how the component creates the greeting message, we just want to know if it created it with the correct values.

Because we don’t focus on the implementation, the test won’t break if we change the way the method creates the greeting message.

Let’s take a look at a couple more examples of what we shouldn’t test.