We use cookies to ensure you get the best experience on our website.
Home / Tutorials / Vue / E2E Testing

In this Vue tutorial we learn how to test our application by simulating the steps a user would take in a browser with end-to-end (E2E) testing.

We cover the Cypress test runner and browser and how to write and run tests with it.

If you want to follow along with the examples, you will need to create an app generated by the Vue CLI and add E2E Testing with Cypress.

We want to Manually select features.

Then select Cypress as the testing solution.

End-to-End testing checks that the combined parts of our application behave as we would expect. It simulates the steps a user would take when using our app.

As an example, let’s consider an application that increases a counter when the user clicks on a button. An End-to-End test for it would take the following steps.

This may seem like the only type of test we’ll ever need, but trying to automate user behavior in a browser has some problems.

Generally, End-to-End tests are not the most reliable method of testing and many developers don’t use it at all.

On the other hand, End-to-End testing can be very useful because unlike unit and snapshot testing, it allows us to see how different parts of the app work together.

The two most popular tools for performing End-to-End tests are Nightwatch and Cypress .

We’ll be using Cypress as the E2E framework in this course because we find it to be faster and easier to use than Nightwatch.

The downside to Cypress is that it uses a built-in version of the Chromium browser. The tests will only be valid for Chromium-based browsers like Google Chrome, Microsoft Edge and Brave. Browsers like Firefox and Opera will have to be manually tested.

Although we can store our E2E test files anywhere in the project, the convention in Vue is to store them in /tests/e2e/ in the project’s main directory.

When we scaffold a new project that includes E2E testing, the CLI will create the following files and folders.

The cypress.json file in the root directory is the configuration object that defines the plugins file for Cypress. Plugins allow us to modify or extend internal behavior like compiling TypeScript code before running a test.

The /plugins/index.js file that it links to should look similar to the following.

The function that’s being exported has several options.

How to write an End-to-End (E2E) test with Cypress

The API for writing E2E tests is like that of Unit testing , most testing tools adopt similar features and syntax.

Cypress uses a test interface borrowed from Mocha . That means we can use describe..it syntax like we did with Jest.

We can also use context instead of describe and specify instead of it . You can choose whichever terminology you like best, but we recommend sticking with describe..it syntax to avoid confusion between testing frameworks.

If we open the /tests/e2e/specs/test.js file that the CLI generated for us, we should see an example test that also uses describe..it syntax.

Inside the it block however, are two new statements.

Cypress provides us with numerous global functions that help us test our application. These functions can be accessed through the cy object with dot notation.

A list of all the functions is available in the official Cypress API Documentation . Let’s take a quick look at the two in the test.

The testing required depends on your project and unfortunately we can’t cover every case. But because the tests are so similar to Jest, it won’t be difficult for you to write if you keep the Documentation handy.

We’ll leave the test “as-is” and just show you how to run the suite.

How to run your tests

When the project generated, it created a new testing script in the package.json file.

So all we need to do is run the following command to start the Cypress UI.

Executing the command will tell Cypress to compile the application and start a development server. It will also open the Cypress Test Runner. 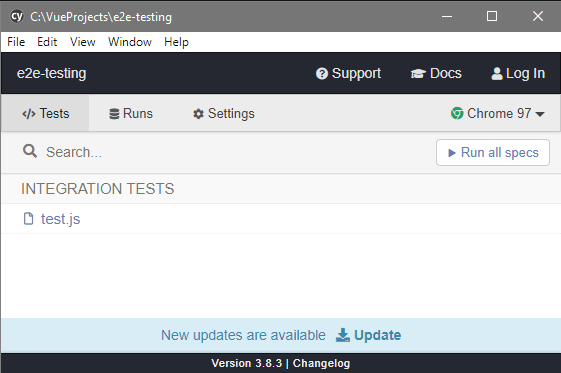 This program allows us to view and start the tests that are registered for our app. To start an individual test, click on its file name in the window. 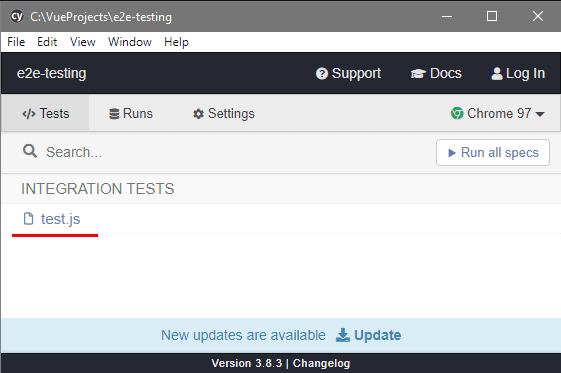 Cypress will then launch its custom browser and start running the test. 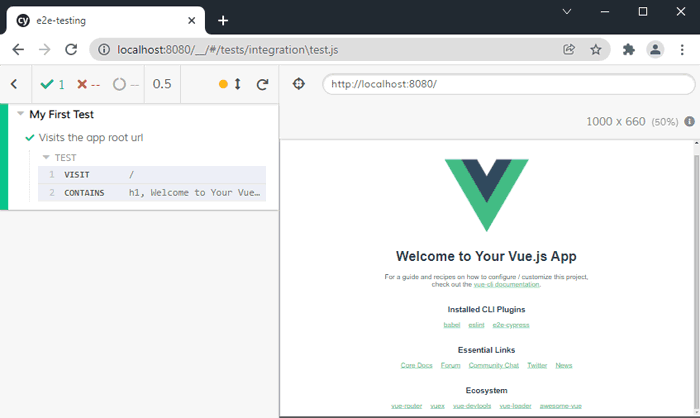 Let’s quickly take a look at the browser window. The window is divided into two parts.

For more information on the topics covered in this lesson, please see the relevant section below.