Internet Explorer is not supported. Please use one of the browsers below:

In this Sass/SCSS tutorial we write our very first Sass and SCSS script and compile it into a CSS stylesheet.

We cover a simple project structure, how to compile Sass/SCSS with the command line and how to automate the compilation process.

Here's a table of contents of what you'll learn in this lesson:
(click on a link to skip to its section)

Before we write our first script, let’s create a space for everything to live in.

Project structure for Sass is a very important topic that we cover in the Sass Project Structure lesson. For now though, we’ll be using a something simple.

Inside the ‘LearningSass’ project folder, create the following two folders.

If you’re using VS Code as your IDE, you can simply right-click in the Project Explorer pane to the left and select New folder. You can also use the buttons in the bar to create new files and folders. 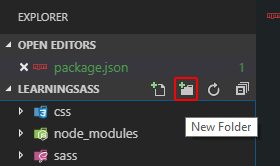 If you’re using another IDE like Atom, you will also be able to create new folders in the project directly from the Project Explorer pane.

If you want to use the terminal to create new folders, navigate to your ‘LearningSass’ folder and execute the following commands.

Windows, Mac and Linux all use the mkdir command, followed by the name of the new folder, to create new folders. We can create multiple folders at once by simply separating their names with a space.

Please see the next section of this lesson if you want to use the older indented syntax instead of SCSS.

Inside the ‘sass’ folder in the project, create a new file called main.scss.

As a simple example in our first script, we’ll change the background color of the body. Write or copy the following code in your main.scss file and save it.

Please see the previous section of this lesson if you want to use the newer SCSS syntax instead of the older indented Sass syntax.

Inside the ‘sass’ folder in the project, create a new file called main.sass.

For our first script we’ll do something simple. Let’s change the background color of the body element. Write or copy the following code into your main.sass file and save it.

Sass syntax looks similar to standard CSS, but without any curly braces or semicolons.

Next, we’ll create a simple HTML document to apply the style to. Create an index.html file in the ‘LearningSass’ folder and copy the following HTML code into it.

This will link to a CSS file called style.css in the ‘css’ folder.

The file doesn’t exist yet, and we don’t create it manually it either. When we compile the script, it will automatically create the file for us.

As a quick aside, if you’re using VS Code or any IDE with the Emmet extension installed, you can use the following shortcuts to create the HTML in the example above.

You can find a cheatsheet for Emmet in the official documentation .

To compile a Sass/SCSS script, we use the sass command in the terminal.

We want to compile our script called ‘main’ in the sass folder, to a CSS file called ‘style’ in the css folder. So, our command would look as follows.

Once the script has finished compiling, we can open the newly generated style.css file. It should look similar to the following.

If we open up the HTML file in the browser, we can see that the background color has indeed changed to black.

That’s it! You just wrote and compiled your first Sass/SCSS script and are now ready to start learning all the cool stuff.

The sections below are optional but recommended to make life a little easier for you while you’re developing.

When we’re developing our stylesheet, we move back and forth between the CSS and HTML a lot to test our changes.

It would be tedious to type out that full line of compilation code every time we want to compile our script.

Instead, we can let Sass compile our script automatically each time we save the file so we only have to type the command once.

We do that with the x--watch flag. When we use the flag, we must also separate our source file from our output file with a colon instead of a space.

When we run the command above, Sass will compile the script each time we save the file.

If we now make a change to the script, like change the color to blue for example, we will see console print the following message.

And if we go back to the browser and refresh the page, we’ll see the background color changed to blue.

If we don’t want to watch the file anymore, we can press Ctrl+C (or Cmd+C on Mac) to stop it, or simply close the terminal.

We can make our compile command even shorter by defining a custom NPM task, also known as an NPM script.

Open the package.json file in the code editor. It should look something like the example below.

We’re interested in the entry under “scripts”. These are commands that we can execute in the terminal.

A command is specified as a key:value pair, each wrapped in quotes and separated by a colon.

The key is the command we type in the terminal and the value is the script that executes.

Let’s modify this script and add our watch command to be executed.

The package.json file should now look something like this with our new command added.

From now on we can simply type the new command and it will automatically compile our sass script.

NPM scripts like these are executed with the npm run command. So to run our script, we have to type the following command.

The terminal should show the following message.

If you still have the previous command running, press Ctrl+C (or Cmd+C on Mac) to stop its execution.

We’re not limited to only watching for changes in our Sass code, we can do it with our HTML as well.

To do this we need to install the Live Server NPM package into our project, just like we installed Sass.

Once this package has been installed we can create a script and add it to the NPM task list, separating them with a comma.

The scripts entry in the package.json file should now look like this.

What we could do at this point is open another terminal tab and run the live server, but there’s a better way.

We can combine the two tasks and run them both at once with the npm-run-all package , so let’s install it as well.

Once the package is installed, we can create the command that allows us to run multiple tasks.

This command will run the specified tasks in sequence. If we want to run both at the same time, we simply add the --parallel flag.

Now let’s create a third task that will run the other two. The package.json should then look like this.

Now we only need to run a single short command once when we start working. Our workflow is a lot more efficient.

We can test it by executing the command above, then changing the background color again in our Sass script and saving the file.

Our Sass will be automatically compiled and the browser will refresh with the updated changes.

We create a final build process in a similar manner in the Sass Build Process lesson.