We use cookies to ensure you get the best experience on our website.
Home Tutorials MongoDB Replication

In this MongoDB tutorial we learn how to synchronize data across multiple servers with replica sets.

We cover how to set up and manage members of a replica set and how elections work.

Replication allows us to synchronize data across multiple servers.

Having multiple copies of our data provides us with many benefits like data safety and availability.

How does replication work

MongoDB uses a replica set to achieve replication. A replica set is a group of mongod (Mongo server) instances that host the same data set.

A replica set consists out of nodes. One node is a primary node that receives all write operations. Secondary nodes simply apply operations from the primary so that they have the same data set.

A replica set may have only a single primary node. 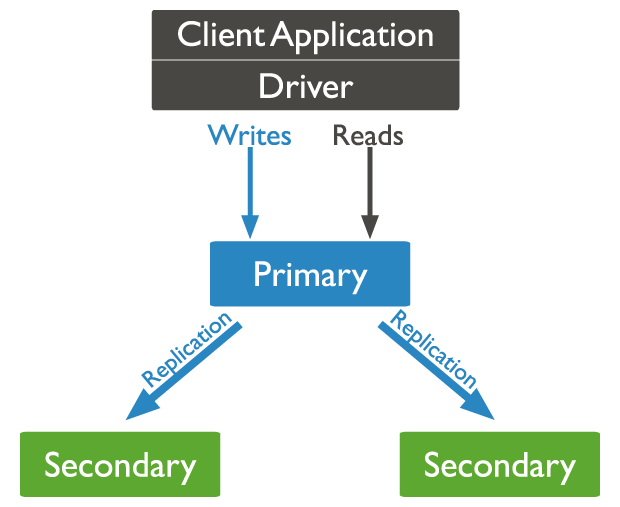 How to set up a replica set

To set up a replica set, we convert a standalone mongod (Mongo server) instance to a replica.

1. Shut down any running instances of mongod. by pressing Ctrl+C or by exiting the terminal/command prompt.

2. We start the server by adding the --replSet flag to the command and giving a name for our replica set instance.

In the example above we create a new replica set with the name ‘rs0’.

3. Next, open a second terminal/command prompt and start a mongo (mongo database) instance.

We have to initiate our replica set first, by using the rs.initiate() method.

Because we didn’t specify a configuration, a default one will be used.

3.1 Optionally, we can also specify a document with config options, like the following.

3.3 The terminal/command prompt will also show us which replica set we’re working with as well as the node we’re in.

Optionally, we can check if we’re using a primary node with the db.isMaster() method.

How to add members to a replica set

To add another instance to a replica set we use the rs.add() method.

How to temporarily disable a member from becoming primary

To make the current replica set member ineligible to become primary for a specified period of time, we use the rs.freeze() method.

This method takes one argument.

For example, if we wanted to stop the member from becoming primary for a minute, we would freeze it for 60.

How to temporarily change a primary to a secondary

We can tell the primary node to become a secondary with the rs.stepDown() method.

After the primary steps down, any eligible secondaries will hold an election to become primary.

The step down doesn’t happen immediately however. If no electable secondary nodes are up to date with the primary, the primary will wait up to the secondaryCatchUpPeriodSec (default 10) for the secondary to catch up.

Once the secondary is available, the primary steps down to become a secondary and cannot become a primary again until the specified stepDownSecs has passed.

For example, if we want our primary node to step down for 60 seconds if an electable secondary can catch up within 10 seconds.

How to remove a replica set member

MongoDB allows us to remove replica set members with the rs.remove() method.

This method takes one argument.

In version 4.2 and above we can immediately drop all outgoing connections by running the dropConnections admin command on the remaining members of the set.

Replica sets hold elections to determine which member will become primary when one or more specific events occur.

Every 2 seconds, members send pings (heartbeats) to each other. If the ping doesn’t return in 10 seconds, the other members will mark this node as inaccessible. MongoDB’s election algorithm will make a “best-effort” attempt to have a secondary with the highest priority in place.

A replica set may have 50 members, of which 7 may vote. These voting members also have a priority, set in its configuration, which is used to determine which secondary will become primary.

It’s important to note that we should not use votes to control which member will become a primary. Instead we should modify the priority option in the config.

We only alter the number of votes in exceptional cases, for example to permit more than 7 voting members.

Non-voting members have 0 votes and must have a priority of 0.