We use cookies to ensure you get the best experience on our website.
Home Tutorials Javascript DOM

In this Javascript tutorial we learn what the DOM is, how it works and how to interact with its objects and their methods and properties.

Before starting this tutorial, we recommend that you have at least the basic knowledge of objects in Javascript, which we cover in more detail in the Standalone Objects tutorial

What is the DOM

Every webpage, and the elements inside of it, can be considered to be an object. For example, the webpage itself is an object called document and has properties and methods associated with it that allows us to interact with it.

The document object makes the write() method available to us to write some text to the webpage.

Similarly, all other document elements like <title>, <body> and <h1> are objects as well and have properties and methods available to them. All of these make up the Document Object Model, or DOM.

Objects are organized in a hierarchy. For example:

The individual html elements are then children of the document object. For example:

Below is a simple tree to illustrate this concept. 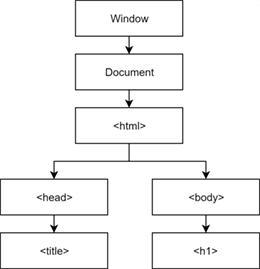 We can interact with the DOM through a variety of object properties and methods.

The table below lists the properties available to DOM objects.

The table below lists methods available to DOM objects.

We will discuss many of these properties and methods, with examples, in the following lessons.